This month I made another batch of apple vinegar. I had harvested a few apples from my mother's front yard. They had fallen down and were brown and desseccated in the middle. The tree had rejected them as viable seeds because of this. The outer part was still usable to make vinegar from.

I cut the apples into pieces. The good parts I put in the mason jar, the bad parts I discarded to the compost heap. I added water to fill the jar, leaving only a few centimeters of air at the top. I placed the jar on a saucer. The saucer is to catch any overflowing liquid which makes cleanup easier.

Because of the hot weather, bubbles started forming the same day. The fermentation slowed down again after about a week. I stirred the whole thing daily, pushing down the parts that were above the water. The smell turned from apple juice to cider quite quickly. The apple parts that were exposed to air turned brown.

After fermentation was mostly done, I pushed the concoction through a sieve. This is to separate peels, apple cores and bigger/harder bits from what will end up as apple vinegar. I poured the resulting liquid back in the mason jar. I had lost about 1/3 of the volume, so I added water to compensate for that.

I placed the mason jar back on the counter. This time leaving it alone to do its thing. After two days I noticed a thin film growing on the surface of the liquid: the vinegar mother. I observed this by very lightly rocking the glass back and forth and seeing tiny wrinkles appear on the surface.

I will monitor the smell and when it has turned sufficiently acidic, I will transfer the vinegar into a glass bottle for use in cooking. 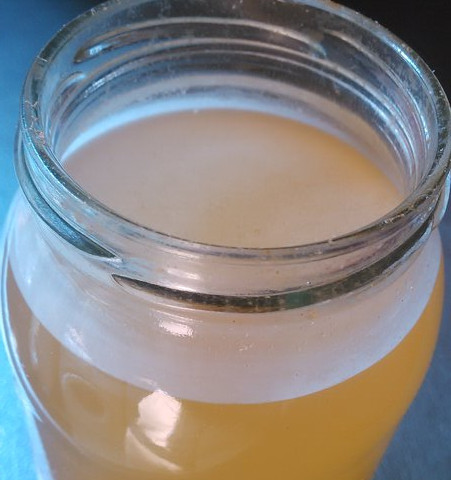 The white layer on the surface (at the edge of liquid and air) is the developing vinegar mother. 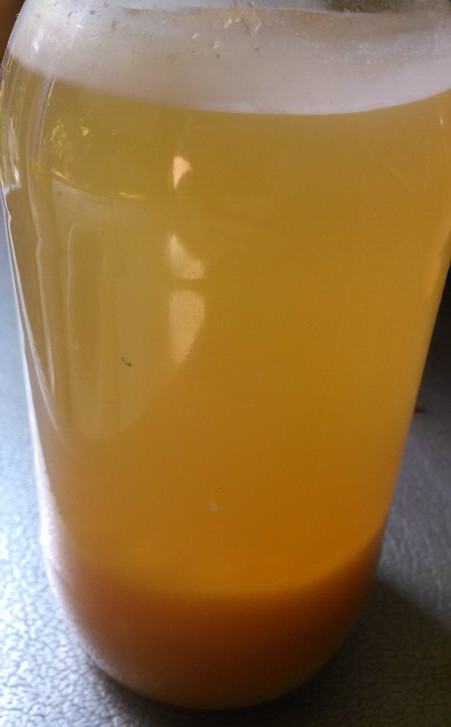 The side view of the jar. From top to bottom: air, vinegar mother, water/alcohol/vinegar mixture, apple sediment. Note that the vinegar mother is very thin (< 1mm) but covers part of the side of the glass, making it seem much larger than it actually is.