This is a design for the compost bin in Arno's backyard. 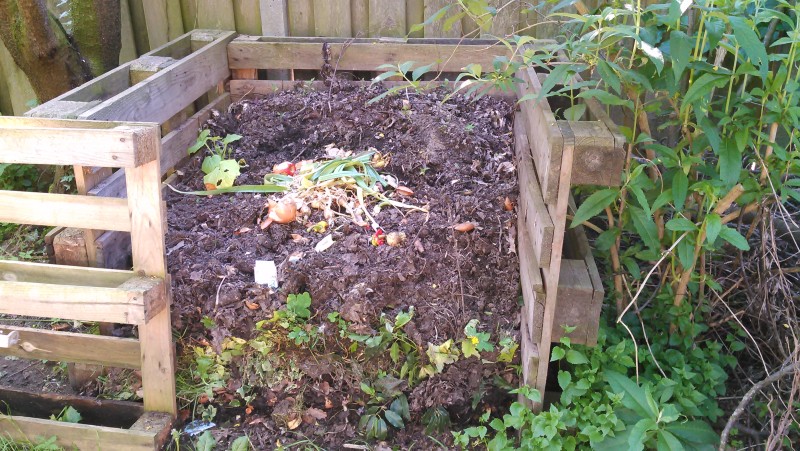 I used CEAP in designing this.

I watched several videos on YouTube about composting. Like Everything You Know About Composting is Wrong by Mike McGrath at TEDxPhoenixville. He makes the case that leaf compost is the best compost. You don't need to add anything else to it. However, leafs need to be broken up to start the process. Otherwise leafs stick together to make a mat. The mat is a way for a tree to suffocate competition from seedlings around its base.

Some of the design considerations:

Given all the already existing structures in the garden, the logical place for the compost bin is under the tree.

We sourced 4 pallets from nearby locations. We set them upright on the long side. The figure below shows how.

There was no need to secure the pallets. The geometry provides enough stability.

We filled the bottom of the bin with branches. This is to provide a way to get oxygen into the lower part of the pile.

I used the tub in my bike trailer to collect material. The tub can hold about 90 liters of material. I collected several tubfulls of leafs from the nearby streets. Occasionally I also took a tub of grass clippings from piles on the side of the street. There, city workers had mowed the grass in the nearby park and put the piles out for later collection.

The inside size of the bin is 1m10 x 1m10 x 0m80. When full, the bin contains a volume of about 1000 liters. Filling the bin to the rim took a few trips. After that, almost every other week, the pile had sunk enough to put in another two tubs of material. Unfortunately I have not kept a record of what went into the pile. I do remember trying to alternate layers a bit. So after a few tubs of leafs, I added a tub of grass clippings or some other green material I found. 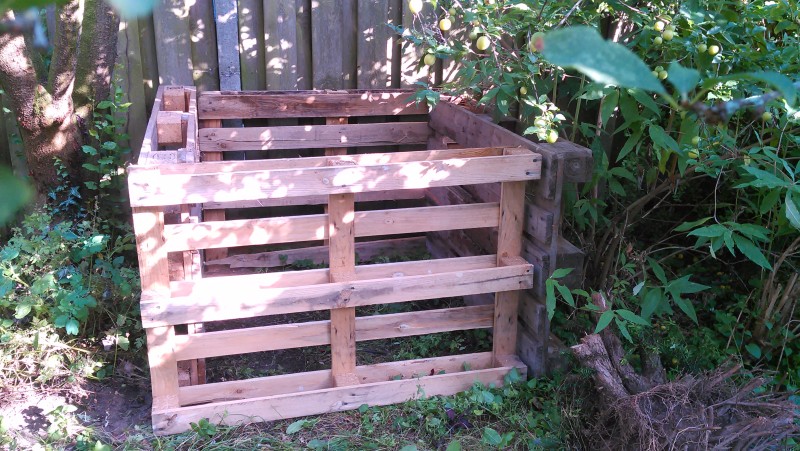 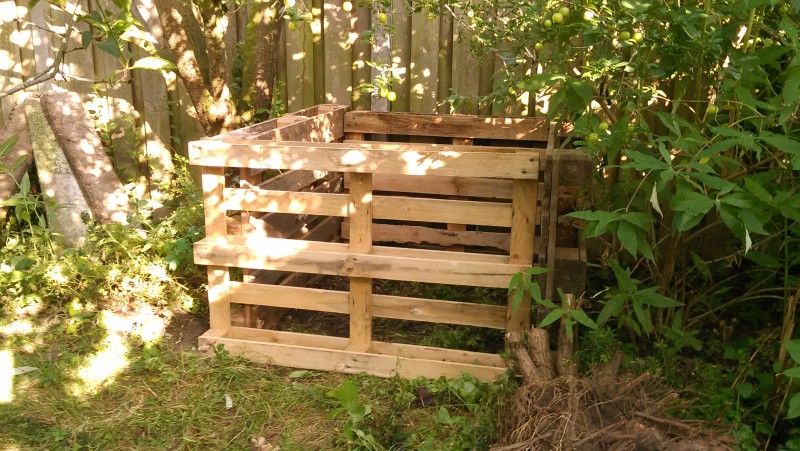 Filled up with mostly leafs in October 2017 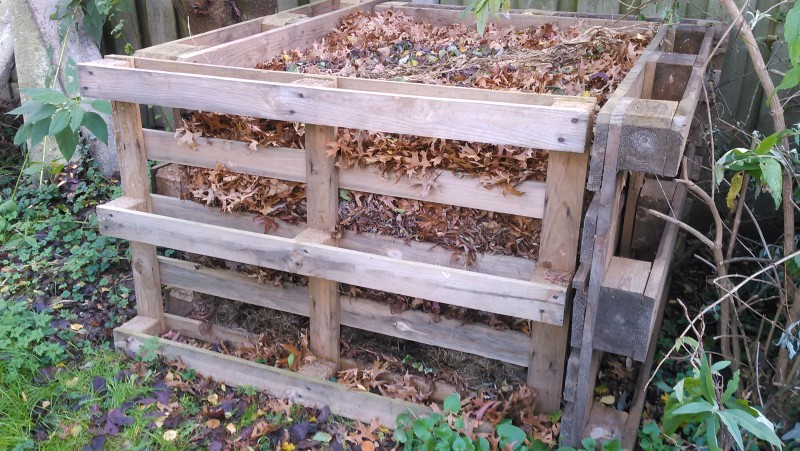 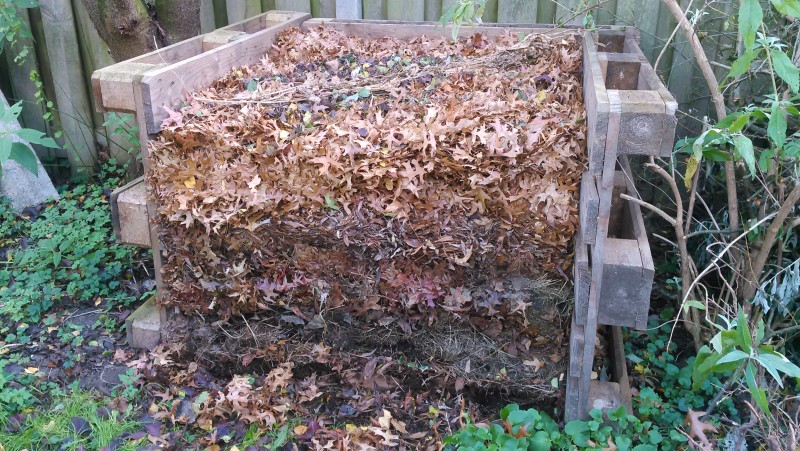 Note the coloration of the leafs going from brown at the top (most recently added) to black at the bottom (longest in the bin). 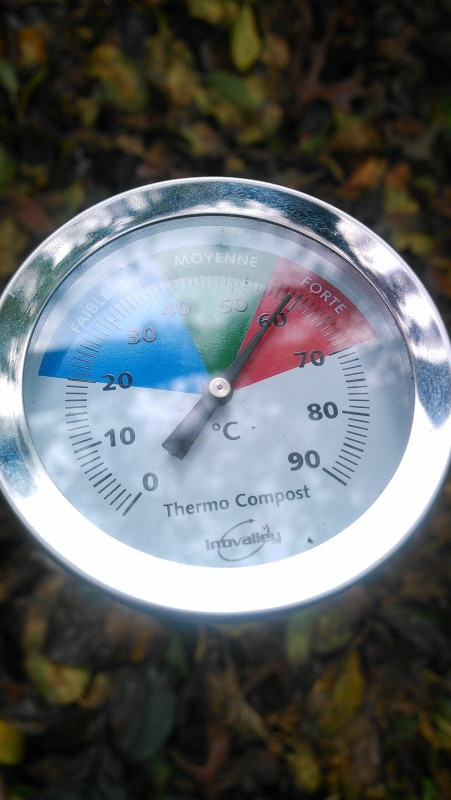 In October, the thermometer shows the thermophilic reactions going on in the compost pile. 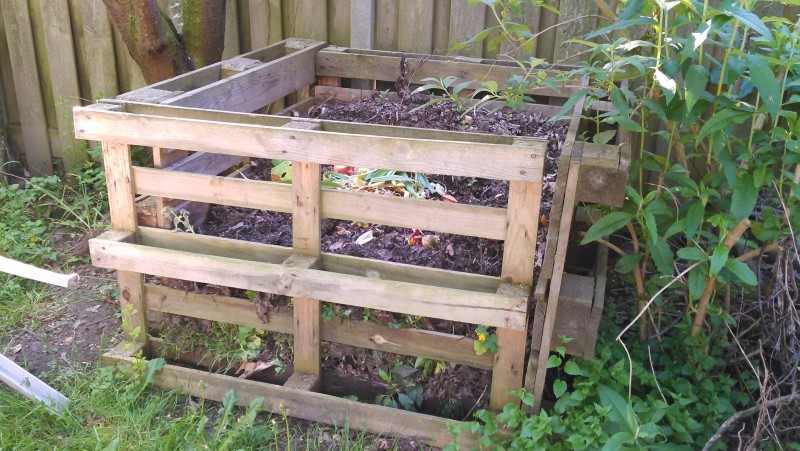 The green leafs in the second picture at the bottom of the compost pile were a recent addition. On top you can see recent additions of kitchen cuttings. The contents of the bin looks a lot like compost. We also saw a few tomato plants growing on top of the mound. We planted a pumpkin to see if that would work as well.

Note also the level of material in the compost bin. The bin here is filled to about 70% of capacity. We have taken almost no material out since starting the bin! The settling of the material seems to have stopped. So we have about 700 liters of compost available for use in the garden.

I expect the pallets will be subjected to rot. They will probably need to be replaced in a few years.

As we keep adding kitchen cuttings to the heap, I try to cover the new material with stuff that is already in the pile. In effect this is turning the pile on a very limited scale.

The Humanure handbook explicitly states no turning is necessary. Out of curiosity, I have turned the compost pile a few times to see how the composting process is progressing. I found turning is a lot of work.

When the pile was young, I found some places in the pile where leafs were clumped together and were not even beginning to compost. After a few months, most things were decomposing. You could still identify some elements while others had already turned to compost.

The compost bin smelled neutral, so there was little anaerobic activity.

The only extra animal activity we saw were birds rummaging through the pile, searching for food scraps and insects. We could discourage this by covering the pile a bit better after adding to it. Since we like birds visiting our garden, we leave it as is for now.

So far the results have exceeded the expectations.